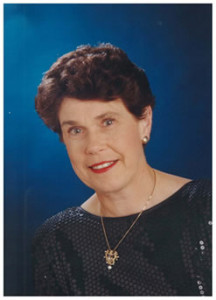 The Star Chorale wishes to acknowledge its exceptional founder and leader, Jane Elton Brown OAM, whose passion and ethos shaped the choir it is today. Her drive for excellence, profound musical knowledge and attention to detail created The Star Chorale’s reputation as one of Melbourne’s leading choirs.

The choir owes its very existence to Jane’s commitment to authenticity in performance. In 1991, as MLC Music Director, she recruited students’ fathers and brothers and created the MLC Male Voice Choir. That way “her” girls could perform choral works such as Handel’s “Messiah”, which requires male voices.

That male voice choir amalgamated with the MLC Old Collegians Choir in 2000, forming a choir with a name almost too long to put on a poster. By 2004 it was known as “The Star Chorale”.

Jane Elton Brown remains the most memorable of teachers, regularly inspiring singers to master choral works they had barely heard of previously and singing them to exacting performance standards. Since leaving Star Chorale in 2016, she continued to inspire in her work directing and conducting the Glen Eira City Choir until her retirement in 2019.

The members of The Star Chorale wish to record their gratitude to their former Music Director for her dynamic leadership in the sixteen years of musical pleasure shared with her.