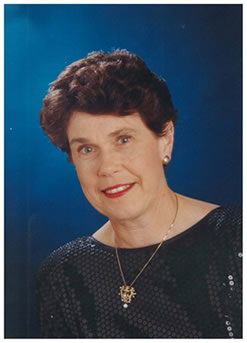 In 1971, Jane was appointed Director of Music at MLC and held that position for 29 years until her retirement from MLC in 1999. At MLC, her Music Directorship saw the planning and building of a magnificent new Music School, which she opened in March 1995. In May 2001, the central area of the MLC Music School was named the Jane Elton Brown Performance Staircase.

In 1981, Jane conducted the MLC Chorale on a concert tour in England, and in 1988 her Chorale was selected to perform at the Conference of the International Society for Music Education. The public profile of her work provides variety through commercial recordings, CDs, radio broadcasts, television appearances and live performances. The live performances included directing the MLC Choir in concerts with John Farnham in the Melbourne Concert Hall in 1991 and with Dame Kiri Te Kanawa in 1993 at Werribee Park.

Jane was the founder/conductor of the MLC Male Voice Choir and conductor/director of the MLC Old Collegians’ Choir. These two Choirs were brought together under the name of The Star Chorale in the early 2000s. Jane conducted this ensemble in successful performances of such works as Faure’s Requiem, Vivaldi’s Gloria, Mozart’s Requiem, Haydn’s Creation and Mendelssohn’s Elijah, John Rutter’s Gloria, Orff’s Carmina Burana,, the Brahms German Requiem, and Verdi’s magnificent, operatic Requiem.

She resigned from this position in August 2016.

In 2001, Jane was appointed conductor of the Glen Eira City Choir, with which she has also conducted successful performances of these and other works.

Jane is an experienced examiner in music, speaker/presenter at conferences and seminars, and adjudicator at eisteddfods. Jane recently retired as Director of Music at The MacRobertson Girls’ High School, where she enjoyed fostering a comprehensive choral and instrumental programme. A performance tour to England and Scotland by MacRob musicians was a highlight of her work at that school.

Jane was awarded a Medal of the Order of Australia (OAM) for services to music in the 2011 Queen’s Birthday Honours List.